Since 2014, the Franciscan Sisters of Mary have shifted investments from the fossil fuel industry to projects and companies that develop and promote clean and renewable energy, energy efficiency, sustainable agriculture and forestry, and other climate solutions.

The FSM have, for instance, invested in M-KOPA Solar, a company that provides solar power affordably to hundreds of thousands of customers in East Africa who otherwise would be burning kerosene or wood to provide light and heat.

Our investments are providing alternatives—such as harvesting the native acai berry—to clearcutting the rainforest.

We invest in companies that practice responsible timbering, protecting wildlife habitats and replenishing forests even as they harvest trees.

After careful research, we partnered with investment advisors (originally Imprint Capital, which became part of Goldman Sachs) that specialize in impact investing and fossil fuel divestment. With their guidance and expertise, we have transferred our investments that were damaging the environment to ones that provide a positive environmental and social outcome—and that overall have been financial successes as well.

The Franciscan Sisters of Mary are eager to share their experience with divesting and reinvesting, to encourage others—especially faith-based institutions—to live out their environmental and social values by investing in companies that provide sound, financially viable alternatives to investments in coal, oil, and gas industries.

Over the past several years, FSM has spread the word about divest and invest at a number of venues: 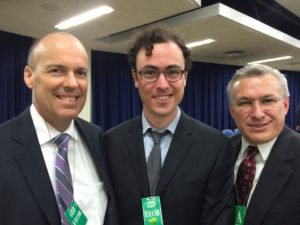 John O’Shaughnessy is often called to share the FSM success in impact (mission-related) investing, especially with other faith-based organizations. Impact investing is a solid way for such organizations to take socially responsible investing to the next level, living out in positive ways the values and beliefs they hold while still achieving a strong financial bottom line.